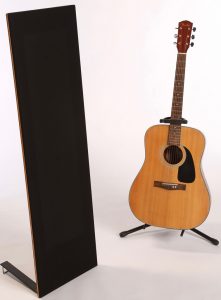 Sound That Isn’t Burdened By Boxes

When you play music through Magneplanars, instrumental and vocal performers sound as if they’re right there with you in your listening room.

One reason for the extraordinarily lifelike Magneplanar sound is the absence of box-like enclosures. (Cup your hands around your mouth and speak loudly to approximate the box effect.)

Magneplanars are configured as panels. While boxes can constrict sound, panel-shaped Magneplanars open up a wide, uncommonly realistic soundstage.

In that respect, they’re the sonic equivalent of large HDTV monitors.

Every audio enthusiast who has heard Magneplanars will tell you they represent outstanding value. Speakers sounding anywhere near as good invariably sell for at least two or three times the price of comparable Magneplanar models.

Magneplanar’s entry-level model, The MMGi, is just one example. Lyric customers hearing it for the first time are invariably shocked to find they can take a pair home for only $650.

The MMGi, incidentally, is a floorstanding model, not a small, sonically-compromised, stand-mounted speaker.

Nevertheless, it costs no more than many shoebox-sized speakers. We’re talking about the cost of the sonic shoeboxes alone. The stands such speakers need to perform optimally can add substantially to their price tags.

In addition to the MMGi, Magnepan offers two other full range floorstanders in the under-$2,000 price category. You needn’t believe what we say about their sterling sound quality, since the websites of numerous audiophile magazines are punctuated with the highest praise for them.

To better understand Magneplanars, it’s useful to compare their component parts to the cones, voice coils and magnets that conventional box speakers employ.

Imagine a speaker cone that has been flattened into a thin sheet of mylar just one mil thick. And a voice coil that has had its wire unwound, then reconfigured in a serpentine pattern and attached to that mylar sheet.

Now envision the magnet that drives a conventional speaker’s voice coil, and mentally slice it into strips.

Magneplanars utilize magnet strips like the ones you’re imagining. They’re mounted on perforated pole pieces adjacent to the outer edges of the speakers. In response to amplifier current, the magnets interact with the wire fastened to the mylar Magneplanar diaphragm. That, in turn, moves the mylar sheets, which generate sound waves.

Compared to conventional speakers, the Magneplanar method of reproducing sound more closely approaches the way the ideal theoretical loudspeaker would function. In the perfect audiophile world, a speaker driver would be massless and impose no resistance whatsoever to electrical impulses.

Consequently, musical transients — sounds with sharp leading edges, like plucked strings and snare drum beats — are reproduced with the quick starts that actually characterize them. And sounds that should drop off quickly do just that rather than slowly trailing off.

Speaker drivers existing in the perfect audiophile world would be suspended in free space. That would eliminate the sonic coloration that surrounding box enclosures tend to cause.

Because they have large, panel-shaped sound-launching surfaces rather than small sound sources — cones or domes — they’re better able to recreate the stage on which a recorded musical performance took place.

Consider, too, that amplifier power strikes speaker cones at their centers, where the voice coils are positioned. That energy subsequently radiates outward to the cone edges, and the delay can cause cone surfaces to flex, resulting in blurred sound that lacks musical detail.